Coordinates: 42.1205295029802° N, -90.76573752859653° W
Maquoketa Caves is probably Iowa’s most unique state park. Its caves, limestone formations and rugged bluffs provide visitors a chance to “step back” into geological time thousands of years. Caves vary from the 1,100 feet high ceiling of Dancehall Cave with walkways and a lighting system to the small and dark Dugout Cave. The remaining caves are all different sizes and shapes. Some can be explored by walking while others can best be seen by crawling with a flashlight. The park contains more caves than any other state park in Iowa. Interpreters provide guided tours to facilitate the White Nose Syndrome (WNS) Awareness Program and help prevent the spread of White Nose Syndrome by humans. Attendance at the program is required for those who plan to enter the caves. A beautiful trail system links the caves, formations, and overlooks while providing an exciting hiking experience. Hikers can enjoy the scenery along the six miles of trails. The trails in the eastern part of the park connect the park facilities and provide access to the caves. Trail highlights include the dramatic “Natural Bridge” which stands nearly 50 feet above Raccoon Creek, 17-ton“Balanced Rock”, and “Dancehall Cave.” Beautiful milk white stalactites once hung from the ceilings and stalagmites rose from the floor. Although souvenir hunters have robbed the caves of this rare beauty, some formations still exist. A trail in the western area of the park takes hikers past a restored prairie, an experimental oak savanna restoration and a wildlife food plot. The park changes with the seasons as does the recreational opportunities for the byway traveler. Spring wildflowers give way to the lush green growth of summer. Fall brings dramatic hues of yellow, gold and crimson. Snow transforms the park into a winter wonderland. Early recorded history tells of the Native Americans in the area, and that they were likely visitors to the Raccoon Creek valleys. Artifacts such as pottery, tools and projectile points made of stone found in the caves and surrounding area confirm these accounts. European settlers recognized the unique beauty of the caves in the 1830’s but the first park land was not purchased in 1921. The majority of the park facilities were constructed in the 1930’s by the Civilian Conservation Corps (CCC) and the Works Progress Administration (WPA) including the stone lodge, Dancehall Cave walkway system, stone picnic circle and several hexagonal picnic shelters along the trail. A new interpretive center contains detailed information about the geology of cave formations, park history, and a background of the early “inhabitants” of the park. It also contains a “video tour” of the park, for those who are unable to withstand the rugged terrain that the park offers. The campground contains 29 campsites (17 have full electric hookup) nestled among mature pine trees, complete with a modern shower facility. The beauty of Maquoketa Caves State Park provides a lovely setting for picnicking in the open or under one of the two picnic shelters. A children’s play structure is located between the campground and picnic area.

Any fees?: No (visitation); Yes (camping)

Managed by: The Iowa Department of Natural Resources 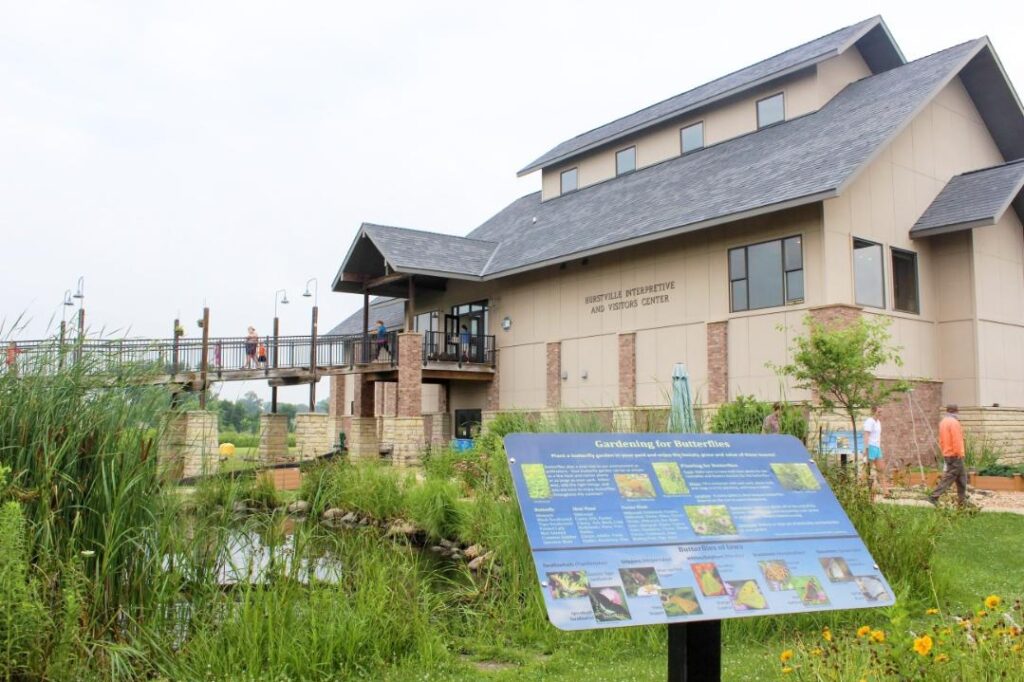 The center is located 1 mile north of Maquoketa on U.S. Highway 61 and 63rd Street.

The Hurstville Interpretive Center has interior and exterior interpretive displays, a visitors center and houses the headquarters of the Jackson County Conservation Board. It is easy to access and has universally accessible opportunities for byway travelers to explore and learn about natural resources at their leisure. The visitors center offers information about the surrounding area and points of interest. Inside exhibits tell the story behind the region’s natural and historic resources through live animals, scale models, displays, interpretive panels and events. The Center also houses traveling exhibits regularly that give visitors a unique experience every time they visit. One of the most popular exhibits at the Center is a live bee hive with a 360 degree viewing opportunity. Byway travelers can enjoy the beauty of prairie and wetland ecosystems on the walking trails, spy a pair of nesting trumpeter swans, or use their binoculars to watch for other wildlife. The restored native prairie provides an opportunity for byway travelers to seek and find reptiles, colorful wildflowers, and a world of insects first hand. The butterfly garden encourages visitors to get an up close look at the native flowers that once graced most of Iowa, photograph butterflies and insects, and consider the scope of Iowa’s lost ecosystems.

Managed by: The Jackson County Conservation Board 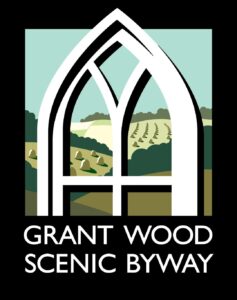 Travelers along the Grant Wood Scenic Byway experience people, places, and panoramas very similar to those that inspired American painter Grant Wood to create his most iconic art work. When he was asked to describe how the area he grew up in shaped his work, Grant Wood said “… I’d been told that the Midwest was flat and ugly and I believed it. Later, after I realized the material around me was paintable and started painting out of my own experience, my work had an emotional quality that was totally lacking before.” Visitors traveling along the GWSB have an opportunity to experience some of the same emotions that inspired Grant Wood. A historic quarry and the community of Stone City, Iowa are located at the most western point of the GWSB. Stone City was made famous in Grant Wood’s paintings of the town by the same name, by the Art Colony Grant Wood started there, and by the limestone quarries that have shaped the city’s appearance and economy. The mid-point of the byway is the city of Maquoketa, where the byway branches to create a loop to the north that provides access to several state, county, and municipal parks, most notably the arching limestone caves of Maquoketa Caves State Park. After seventy-five miles, the byway reaches its eastern most point at the Mississippi River in the city of Bellevue. Bellevue is an all- encompassing east end to the byway, as it offers parks with grandiose views of the Mississippi River and its valley.

The Indian Bluffs & Pictured Rocks WMA are two adjoining forested areas that collectively encompass over 1,550 acres along the Maquoketa River. They, along with the privately owned Indian Bluffs State Preserve, are included in a designated Iowa Bird Conservation Area (BCA) that was publicly dedicated in 2017. This has been called one of eastern Iowa’s most species-rich grassland/savanna/forest habitats, with 243 species of birds identified so far and more expected to be identified in the coming years. The State of Iowa BCA designation recognizes that this area provides important nesting habitat for declining grassland, savanna and forest birds. In addition to the prairie, savanna and interior forest, there is an Algific Talus Slope, which has a fragile micro habitat that harbors delicate threatened and endangered species. There are also primitive river campsites that users can use for up to fourteen consecutive days. Non-maintained, primitive trails near through the forest, prairie and savanna pass or parallel small creeks and along the river. They are graced by ferns, wildflowers, mature forests, limestone bluffs, and giant boulders. Byway travelers have access to adventure activities in these areas including some of the best and most popular rock climbing in the Midwest in Pictured Rocks, especially during fall and spring weekends when the University of Iowa offers classes on Sundays. Byway travelers can enjoy climbing among the trees, which shade most of the climbing walls. Over a dozen different climbs including Windy Point, Chicago Wall, Comic Gallery, Ice Cave Wall, Wild Iowa Wall, and Razorblade Boulder, provide the adventure tourists with several different options. This area also has primitive restrooms and a picnic shelter so byway travelers and their families can spend the day experiencing the limestone bluffs they only see from other locations along the GWSB. Although rock climbing has been occurring at Pictured Rocks for over 30 years, early on it was an unknown, unregulated sport. Today three organizations work together to maintain climbing routes, bolts and fixed hardware and plan for development of new climbing walls and routes, creating opportunities for the GWSB travelers to have an unforgettable experience. You can enjoy a wide variety of caves, but the biggest and most well-known is the Indian Bluff Cave, which at about 800 feet, is only allowed entrance with a permit.

Any fees?: No Fee to visit